The "Why" Behind a Picture Schedule

Summertime was the key behind creating a successful picture schedule for me.  During this time of year, the boys were home from school for at least 4 weeks without any day camp or other program.  This allowed me the time and control necessary to create a picture schedule that worked!

I began creating a picture schedule for Jake and Joe when I finally moved from "reactive" to "proactive" mode.  When they were little it was so natural to feel like I needed to just be there to provide whatever they needed at any given moment.  Whether it was food, changing, a hug or drying of tears, I provided it on the spot.  As the boys got older, I got more worn out.  I felt I needed to be able to have some "control" in the way the day played out!  I thought about this a long time before I actually did one single thing about it.

After having a professional assessment done it was determined that anxiety was the culprit behind many of the behaviors we were seeing at home.  Many of the behaviors manifested themselves as crying, biting, temper tantrums, toileting accidents, upset stomach, throwing things, general refusal to comply and many, many others.  After assessing different situations, it was clear that the boys really just wanted to know what was going on!  As I learned more about strategies I began to memorize the "magic 3" (as I call it).  These are the 3 most important things that come into play when I developed any schedule.  The boys want to know:

Subsequent to that learning, I also realized that they needed to know "When am I done?"  So, I went to work developing a simple daily schedule for a typical summer day.  I wanted to start with something that we could use unchanged for at least one week.  This required me to be as structured as I expected the schedule to be.  We stayed at home for one whole week, but made it fun at home.  We stuck with the schedule so that they knew they could trust it to be true.  The first week looked something like this: 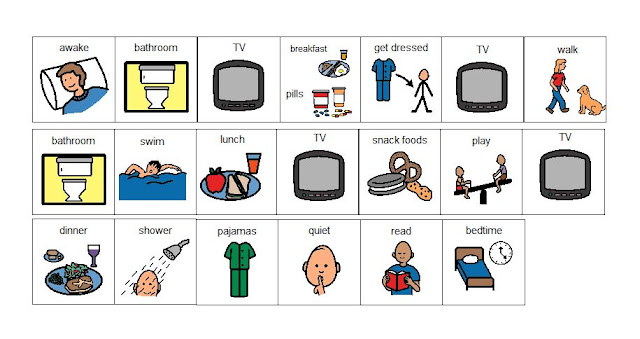 Each morning I would verbally go over the days schedule pointing to each item.  As the day progressed I would revisit the schedule and talk about what was next.  Even if the boys weren't looking directly at me or the schedule, I would continue to do it.  It's amazing what they hear, but don't see!  They were paying attention!  This week of routine allowed me to judge their acceptance of the schedule as well as gauge their behavior.  Having a very structured routine really played like a "baseline" so that I was able to see improvement in behavior each and every day.

The second week I was able to modify one element, but stick to the rest of the day.  I added something that they also liked, such as an ice cream treat in the afternoon.  With every passing day I saw a calm and relaxed environment all around me.  It wasn't like they didn't show some disapproval, for example, when I would attempt to brush their teeth, but I knew this was due to a sensory issue that would need to be addressed separately.  The anxiety surrounding the day's schedule was gone, but not the other behaviors not related to anxiety.  We still had hand-flapping, overstimulation during tv time and dislike of food during meal time.  These were not related to what I was trying to achieve.  I kept telling myself "one thing at a time!"  This exercise in routine was a good lesson for me as well as the boys.  It showed me that this method can work!  It showed the boys that they can trust me to provide what they really needed.

As time has gone by, we have continued to stick firmly to using a schedule every single day.  We even use a schedule when we travel.  It's become a staple in our home and our life.  I realized at one point that I needed to be able to change or rearrange the schedule as needed with the changes in life.  The boys really trust this system now, so I am able to do just about anything.  I found it easier to use a modifyable system that I created called the "all done" method.  This new format required me to work with the boys for a long, long time in order for it to work the way I envisioned it to.  I wanted them to be able to use the schedule independently by moving the scheduled item to the "all done" column in order to "prompt" themselves to move to the next item.  Each morning I "set up" the schedule for the day and they know what to do!  It has literally taken 12 years, but the boys are able to move through their day independently.  That has exceeded my expectations by light years!  Here is what the morning and afternoon schedules look like. 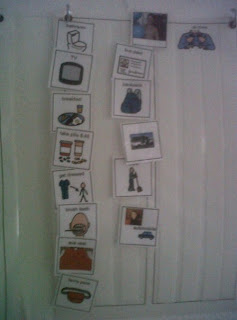 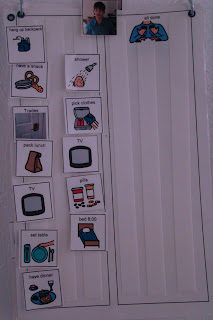 PM Schedule
The photo quality is not the best, but hopefully it shows the method and most of the steps. These schedules hang in the hallway of our home outside of the bathroom and bedrooms. This was it can be accessed at all times, and it's convenient for me to set up and change.

Don't be afraid to try something.  I have tweeked each and every schedule I've tried based on the response that I get.  Sometimes it helps to have more detail, sometimes it helps to have less detail.  It just depends on the circumstance.  No matter what, I am so glad I tried it and so glad it worked!
To learn more about Cindi Rogers, her book or follow her family, please visit mrsrogersworld
Posted by Mrs. Rogers Neighborhood at 12:03 PM 2 comments: