Some May Think IT Strange....But, I'm Ok With IT

There is no guide or book that tells one how to raise 2 boys diagnosed with Fragile X Syndrome.  We’ve been working at it for almost 22 years, so we’ve come a long way, but we still have some road to go.  We’ve done just the very best that we can, like any parent does.  Some of the decisions or actions that we’ve taken may seem strange to some, but, please allow me to explain.


of my first memories of feeling unfamiliar with parenting came when Jake was just 2 years old.  At the daycare he attended they had cut, glued and taped (with help of course) a special project, we called the “Cow Hat”.  He was so proud to wear it home, and we were impressed that he even wore it on his head!  He proceeded to want to wear it during every activity, including while sitting on his spring horsey.  When it was time for bed, he tried to convince us that it must be worn during sleep, but fortunately, the “ba-ba” (bottle) won over and he succumbed to setting in on the dresser.  The next morning, he went directly to the “Cow Hat” and proceeded to put it on.  As soon as he did, the construction paper gave way and it tore.  The tears rolled down his cheeks as he protested.  I quickly got the scotch tape and repaired the precious “Cow Hat”. 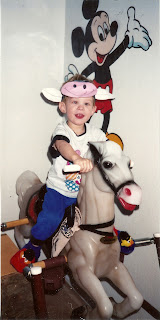 After wearing it all day at daycare, Jake came home with the hat still on his head, but with obvious additional repairs done by others.  He was so proud and smiled from ear to ear.  After a few more days of this repeated process and repairs, I considered the idea of laminating it.  I had no idea how, but it was worth a try for one more day of joy.


Jake even wore this dog-gone “Cow Hat” to the grocery store.  Others must have thought it strange to see such a cute little guy with this bandaged remnant of an art piece on his head! I was ok with it.  I knew that I was not ready to face the guaranteed grief that would result from his loss of “Cow Hat”.  I was a new parent!  I had no idea what I was doing!  I only knew that I was treading water until I had to face reality.  That day finally came, and it wasn’t as bad as I thought.  We told “Cow Hat” “bye-bye” and Jake (being 2) quickly moved on to the next thing.  Shows what I know.


Some years later, I remember a similar feeling of being outside of my experience when it came to taking the boys with me to the grocery store.  By this time, Jake was about 7 years old, and Joe was 5.  In order to have a successful trip at the grocery store, we needed the comfort and safety of having the boys firmly placed in the grocery cart.  Although this did not guarantee a successful trip, it did forego one uncertainty…..the thought of them NOT being in my controlled space.  As I huffed Jake into the cart, weighing in at about 50 pounds and me at a mere 120, I knew the dreaded day would eventually come when I would not be able to do it anymore.  The worry and anxiety I felt in anticipation of this moment was enough to keep me awake at night.


Since I had begun using picture symbols by this point, I relied on this method to once again guide me through.  I made a one-page social story detailing what we would do.  First, I took Jake by himself to the store.  I pointed at the laminated sheet and he trusted me to make it happen.  Others might think it strange when they see me holding a laminated sheet, pointing to it, and talking to Jake like it’s the most exciting thing in the world at that moment.  But, I was ok with it.  Knowing that the alternative outcome would far outweigh it in the strange category.  We crossed the hurdle together and today Jake it my favorite grocery store helper.


I have done many strange or odd things over the years.  As anyone who has raised a son with Fragile X knows, they do tend to get a little bit attached to material things.  Some of these may include shoes or clothing.  My boys are no different.  I remember one t-shirt in particular that Jake, and then Joe, were attached to.  It was a short-sleeved lime green Gecko shirt with fluorescent colors.  I used to buy them at a store called Mervyn’s for a mere $3 and boy were they worth every cent!  In hindsight I was so glad that I went back shortly after I bought the first one to purchase 4 more!  Jake wore that shirt every single day until he finally outgrew them.  He wore them even when they were almost considered a half shirt!  They were washed and dried hundreds of times until we finally had to bypass the rag bag and go directly to the trash.  Some may have thought it strange when I lined up at the checkout register with 5 of the exact same t-shirt, or 2 pair of the exact same shoes.  I was ok with this.


Or the time that I actually called a store in New York to purchase an identical pair of shoes that Joe had become attached to.  “Of course I’ll be happy to pay extra for shipping”, I told the clerk.  She may have thought it strange that I would call all the way from Colorado to buy these shoes, but I was ok with it.  Knowing that the morning routine of getting dressed would not be interrupted one single day was peace enough for me.


We may be considered a bit alienated even when others see our RV taking up 6 parking spaces at the Annual Basketball Tournament.  Those who knew us prior to the year 2006 are ok with it.


Jake started to play on the Unified (with “typical” partners) basketball team in 2005.  We decided that it was important for all of us as a family to attend both practices and games.  Joe did not bode well in this situation.  We worked with experts to slowly and methodically overcome the obstacles that were holding Joe back from participating as a member of our family. (Read blog dated June, 2011 http://www.mrsrogersfxneighborhood.blogspot.com/2011/06/importance-of-rocket.html for full story).  After 2 long years, Joe was finally able to be there with us and appear socially acceptable.  That following year, Joe WANTED to play, so we encouraged it.  At the end of the season there is a huge, loud, crowded basketball tournament where all of the teams come together in one spot, and each team plays up to 3 games in one day.  The first year Joe had not one, but 2 complete meltdowns.  It was just too much for him to do.  The 2nd year, we made a plan to use a more structured visual schedule that included breaks in the car in between games.  Joe still struggled and the outcome was one meltdown.  At the age of 15 and weighing in at 120 pounds, this was not easy.


That summer, we purchased our first RV and the boys had had time to adjust to it and, in fact, love it for its familiar calm.  So, we thought, “why not utilize “Rocket” (the name of our RV) as a transition tool!”  The following spring the basketball tournament was held.  We drove the RV over to the school very early in order to secure the parking spaces needed to accommodate “Rocket”.  We waited in the RV until the first game was about to start, then we went in.  The entire day went off without a hitch.  Others may have found it strange, or even thought us arrogant, but I’m ok with it.  Knowing that we had come so far in allowing our son to be a participant in life, even if it meant bringing along a 17,000 pound RV, was well worth it.  Not giving up is something I cannot portray to others so they will understand.


Anyone that has known us or visited our home knows that Jake, especially, is a huge fan of the program “Mister Rogers Neighborhood”.  This love affair has been going on for as long as I can remember.  When Jake was little he would sit within 2 feet of the television and watch Fred Rogers.  His calm, rote demeanor and monotone voice made it easy to watch.


This obsession, as some would call it, has continued throughout Jake’s life.  He is now almost 24 years old, and it is still a consistent high interest area for him.  His favorite t-shirts to wear to work now have picture of Mr. Rogers on them, and he even has what we call a “Shrine” in his bedroom.  This is the greatest show of respect in Jake’s mind, because to him Mr. Rogers IS life.  Jake spends almost every dollar he earns at work to buy DVDs of the “Mister Rogers Neighborhood” program, and he has quite a collection. 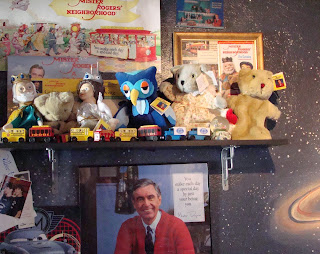 The "Shrine" to Fred Rogers


We have not discouraged such an interest because; we too, have used the wisdom of Fred Rogers in our life.  For example, when our beloved dog died, we found it very comforting to watch the video on “Death of a Goldfish” and read some of his book on “Death and Dying”.  Both boys usually sit quietly when I read these words, and we do it often.  Why would anyone find it strange to embrace such a kind man whose words included things like;


These words have often helped me through a tough spot in my life.


Or, one of my other favorite quotes;
“Part of the problem with the word 'disabilities' is that it immediately suggests an inability to see or hear or walk or do other things that many of us take for granted. But what of people who can't feel? Or talk about their feelings? Or manage their feelings in constructive ways? What of people who aren't able to

Posted by Mrs. Rogers Neighborhood at 10:59 AM