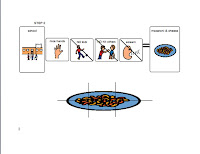 This was our first successful strategy. We have learned that this kind of method gives both of our boys control, and a feeling of success. In addition, it has been transferrable to the job setting where they are both motivated to earn money.
Posted by Mrs. Rogers Neighborhood at 1:16 PM