All the Talk About Food

Since our boys were very young, we raised them the only way we knew how.  Constantly telling them, "No", "Don't do that", etc.  It only seemed natural to continue to tell them what they could not do.  Everyone in their life was constantly telling them what they could not do.  I can only imagine how frustrating that must have been.  As we received our diagnosis of Fragile X Syndrome, and as they got older and it became clear that they wanted some control, so we tried to switch our way of thinking

A big change in all of our lives came when we decided to switch to telling them what they COULD do!  One daily point of frustration was FOOD!  We continuously monitored what they ate, how they ate, what time they ate.  We thought about locking the refrigerator so that only we had access.  We had already stored many of the snack reserves in a locked room.  We could see that this was no way to encourage independence.  We asked ourselves, "How could we manage what they eat and still give them some control?"  After much thought, and some intense consultation with the experts (more on them to come), we came up with an idea.  We would need to be consistent with this idea, and most of all, patient.  We might have to tweek it a bit, depending on the boys' response.

The boys had already been using picture symbols derived from a software program called Boardmaker, so we had a communcation method in place.  We decided to tap into that and develop a space.  There would be a space in the refrigerator (we designated 2 shelves in the door of the refrigerator), and a place in a cabinet where each of their pictures showed their "special place".  Each morning we would "set up" all of the snacks (in the cabinet), or cold items (drinks, yogurt, etc.) that they were allowed to choose from for the entire day. 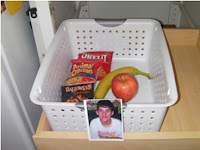 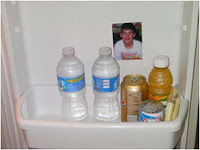 We practiced for weeks telling them that "this is your special spot for Jake's snacks", or "these are your choices".  When they were gone, there was nothing until the meal.  There were tears, stomping, a bit of hitting, and overall displeasure, at first.  We stood firm.  We continued to repeat the same phrases.  We switched out types of snacks to gauge satisfaction.  Some included apples, dried fruits, gummie bears, Gold fish, chips, dried cereal, crackers and others.  We made sure that each day there was one of their favorite things to continue to motivate and keep it interesting.  Amazingly, they always went to their spots!  There was less distraction and pillaging through.  In the first week, they usually ate the majority of items very quickly.  After a while, they learned self-control, and self-regulation.  This took months.

This is just one example of how giving back control of something can affect overall behavior and environment.  With proper supports in place, and a sense of patience unseen in our history, we prevailed!  We have been able to assign the task of "setting up" for the day to someone else.  This is a big dose of satisfaction for us since our overall goal is for our boys "to be as happy and as independent as they can possibly be".
Posted by Mrs. Rogers Neighborhood at 9:12 AM